This 8g net carb chili con carne recipe is so comforting I just want to cozy up to it on a cool fall day. Full of meat, beans, red wine and tomatoes, with a good bit of spice to warm you right to the soul. Just 8g net carbs per serving. 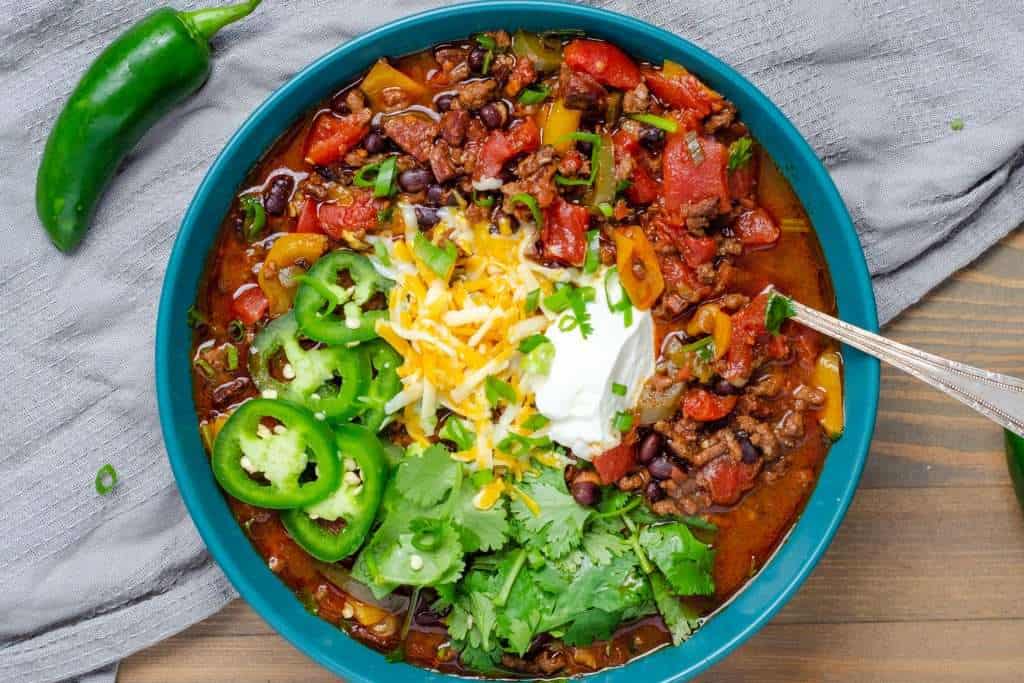 Disclosure: Some of the links below are affiliate links, meaning, at no additional cost or effort to you, I will earn a small commission if you click through the link and make a purchase.

The hot summer days are getting shorter and the nights are starting to feel longer. As I sit out on our balcony drinking my morning coffee writing about my favourite spicy meat stew, I can feel a familiar chill in the air, my balcony garden has all but stopped growing, and some of the seasonal plants have even started to die off.

All these signs point to one thing, I’m bad at gardening…No wait, Fall is coming..

As the cool fall air begins to creep into your home, you need something hearty, warm and comforting like my low carb chili con carne. 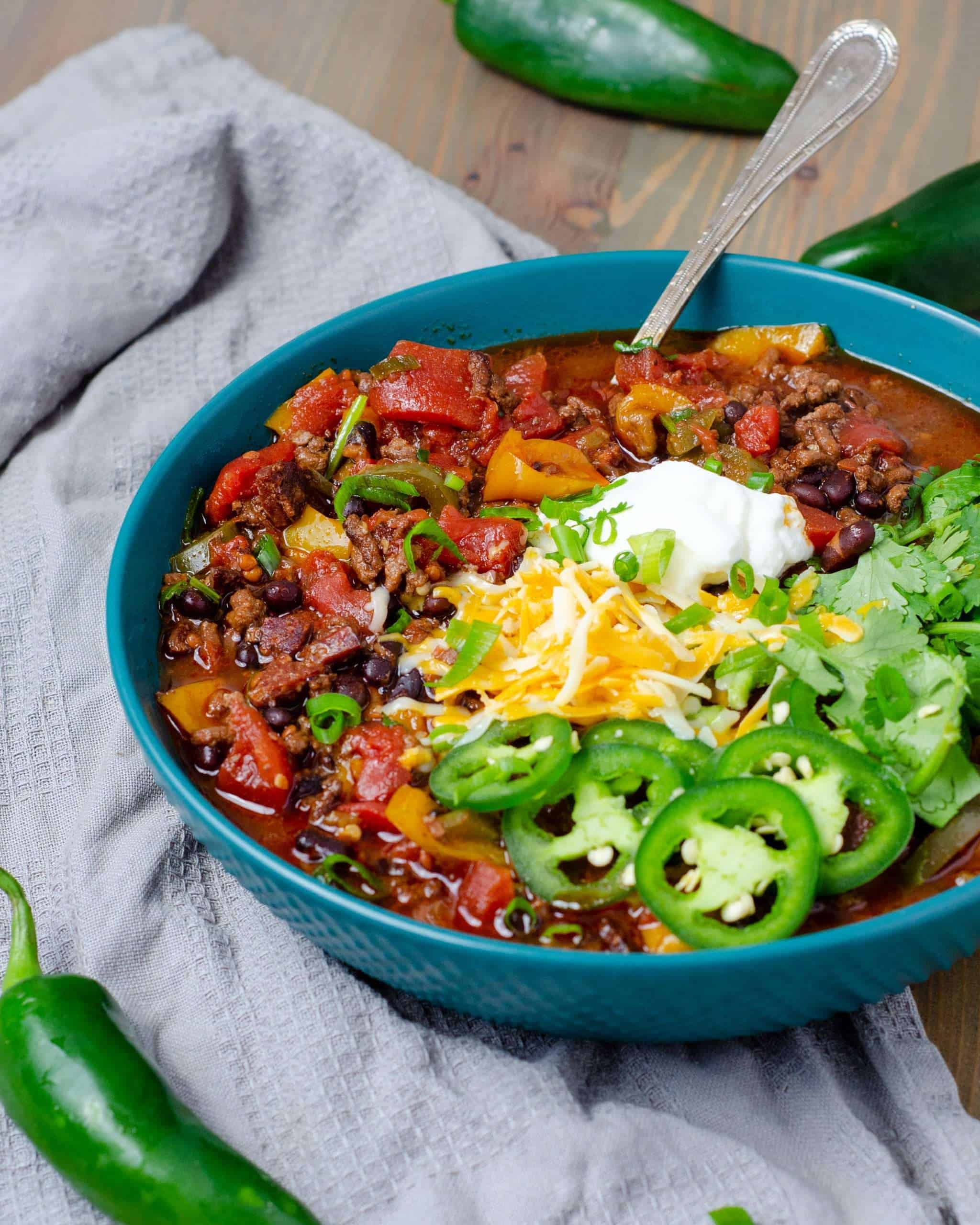 What Is Chili Con Carne?

Chili con carne, literally means chili with meat, and that’s exactly what it is. You may know it by the more common shorthand, ‘chili’. As in, “Let’s have a bowl of chili to warm our soul on this cool fall day”. But there is just something about the way ‘chili con carne’ rolls off the tongue, so I think we will stick with it.

What Is In Low Carb Chili Con Carne?

Chili purist trigger warning: In some parts of the world, cooking chili is a big deal, and people take it seriously. There are many nationwide chili cook-offs in North America every year, some with very specific rules about what constitutes a chili, and what doesn’t.

Some ingredients were chosen because I just like them in chili, and others were chosen as low carb replacements. At the end of it all, what we end up with is a hearty, comforting, and warming bowl of chili with only 8g net carbs to keep you cozy on those cool days ahead. 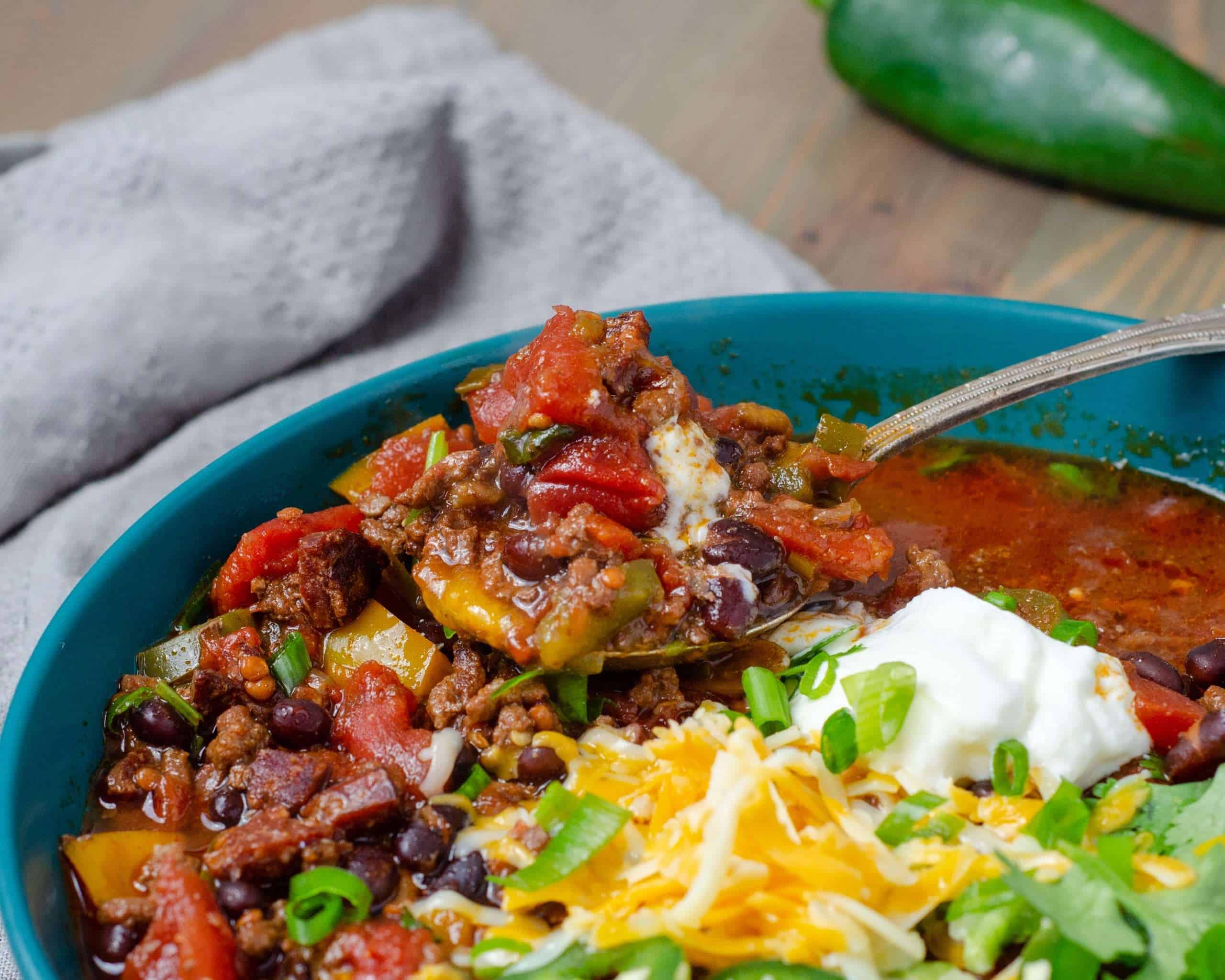 Here are the ingredients in my low carb chili con carne:

Let’s talk a bit about the ingredients used, and how you can change them up to your liking.

The “chili” part of the chili con carne

I use the peppers I have on hand at the time. A sweet red, yellow or orange pepper, and a few fresh jalapeno peppers add a great amount of flavour while keeping the spice level tolerable. I kick that up a notch with some whole dried red chili, cayenne powder, and paprika.

You can moderate the spice level as you feel fit, remember you can always add more spice, but it’s hard to dial back once it’s in there.

If you are growing your own hot chili peppers like mine, which were featured in the summer 2020 seasonal highlight newsletter, (which you would know if you were part of our gang because it would be sitting in your inbox! So join the gang already!)

You have successfully joined the subscriber list. Be sure to check your inbox!

then chili con carne is a great dish to display those homegrown flavours and spices. Not to mention use up the massive yield of peppers you get from each bush!

Not mine though…I got literally 4 and they sucked. My green thumb is still a work in progress. 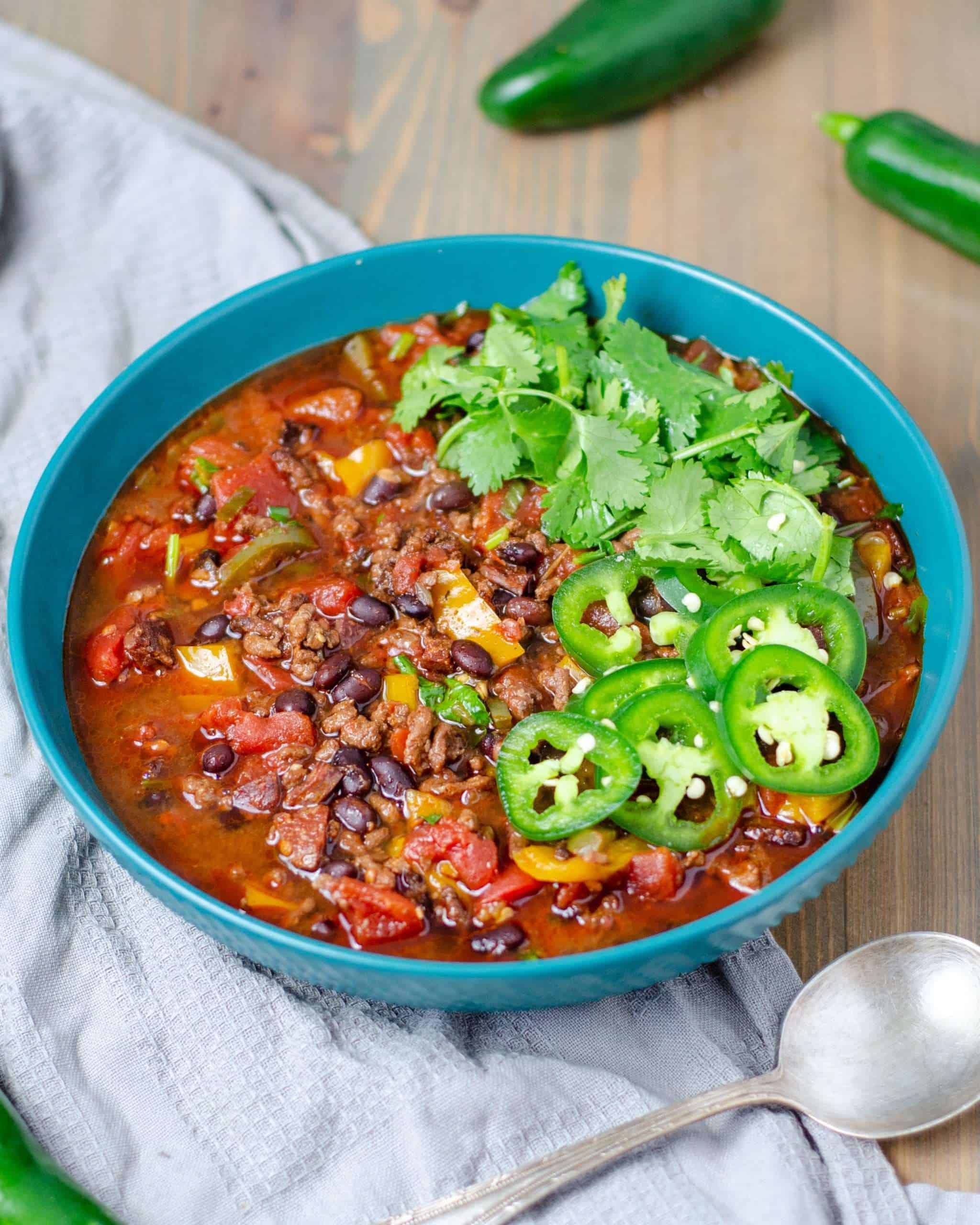 Starting with a dry cured fatty spiced sausage like Spanish chorizo is a great way to add flavour and depth to a pot of homemade chili. Slowly rendering off the chorizo releases a wonderful spiced red fat which is the only cooking oil you will need to make this recipe. No additional cooking oil required.

I like to use the hard cured chorizo but use what you have available to you.

If you can’t find dry cured chorizo or it’s too pricey, go to the corner store or gas station, and buy one of those jumbo chorizo meat sticks sitting on the counter. I have done this, it’s not top quality chorizo but it works great. 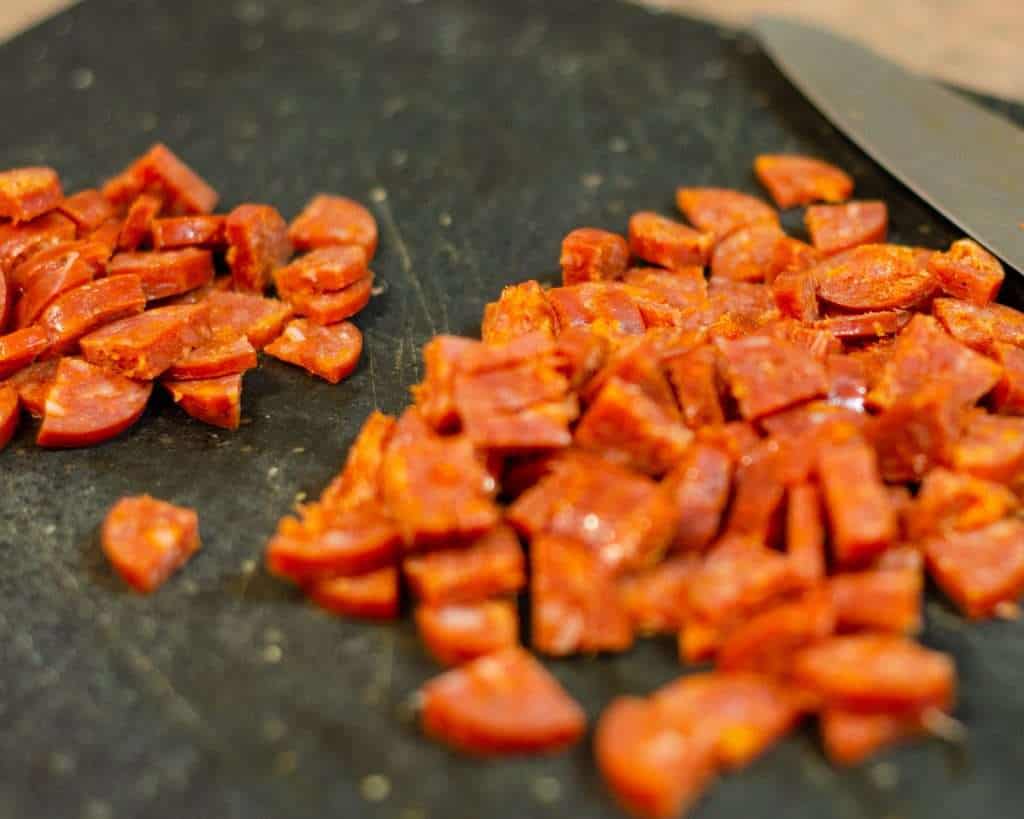 You could also use bacon or any fatty cured meat to render off as your starter.

The main meat in my low carb chili is good old ground beef. Any ground meat will work, but ground beef makes chili hearty and satisfying, and it pairs well with the spicy sausage and red wine.

The remaining ingredients are what will make your chili gravy along with all the wonderful juices and drippings from the meat and peppers. Onions and garlic are a no brainer and will fry up with the meat nicely.

Cumin is in my opinion essential for the flavour I am going for, and cayenne pepper and paprika will help enhance the “chili” flavours since they are both peppers.

The base of the gravy will be canned tomatoes. You can use fresh, but I actually prefer canned stewed/crushed/whatever tomatoes for this. Just buy a good quality canned tomato and it will taste great.

Red wine it what is going to take that chili gravy to the next level by adding a rich underlying flavour that can’t be beat.

Use a good quality dry red wine that is low in sugar. Not only will it help keep the carbs low, but it will help prevent your chili from getting too sweet.

Yes the ever controversial bean. Many feel that beans do not belong in an authentic chili or as a part of a low carb diet. Well I am going to heavily disagree with both of those things.

When I think if chili it has beans, and more importantly, when I think of what I want in a chili, it’s beans! 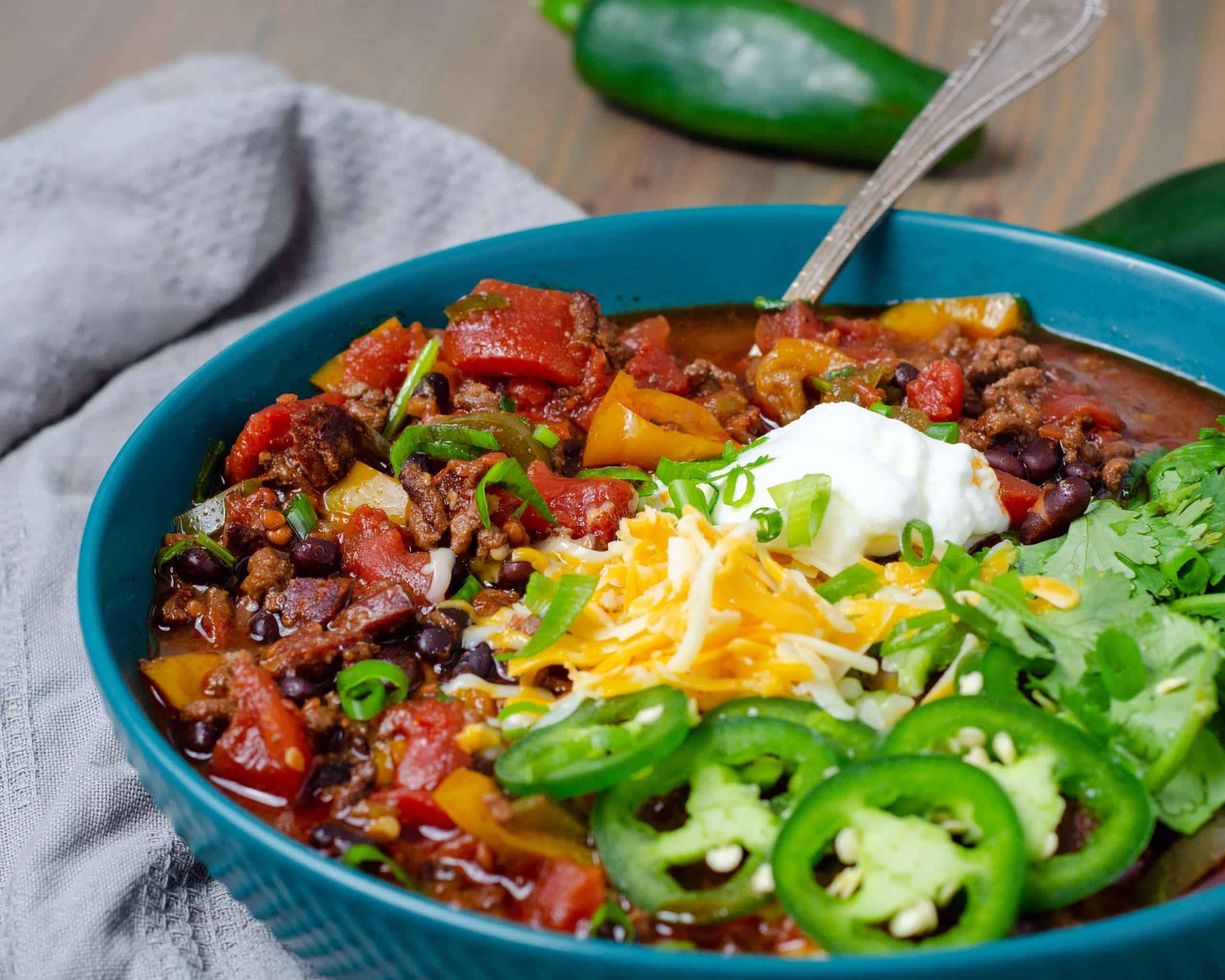 Are Beans High In Carbs?

As for the carb factor, it’s true, some beans are packed with starchy net carbs, and that may be something you choose not to consume as a part of your low carb diet. But there are some lower carb varieties of beans you can choose from.

My favourite type of bean for instance is the common black bean, sometime called the black turtle bean which you can find at any grocery store for cheap. You can usually best identify which black bean you are looking for from the nutritional label, look for the one that works for you. I aim for a bean with around 25g net carbs per cup.

Now that may sound like a lot, but this chili recipes makes quite a few bowlfuls, meaning the beans, of which we only used 3/4 of a cup, are only contributing around 4g of net carbs per serving.

Again it will all come down to personal preference, and tolerance. Some people won’t handle beans well, maybe it makes you feel ill, or those carbs actually do mess with the satiety you have worked so hard to achieve by eating low carb. Perhaps you have a reason for trying to maintain a strict state of ketosis and those are all valid reasons. Don’t add the beans if you don’t want to.

There are also some brands of beans that claim a very low carb count like these Eden Organic black soy beans which state 1g net carb! So feel free to give them a try and let me know how it turns out!

Either way, use what you like, and what you know works for you. Even if that means no beans, some of the chili purists out there will be happy with that.

**If you are starting with dried beans you will need to soak them overnight or boil them with the lid on, for 1-1.5 hours until soft.**

Not only can chili be made in large batches ahead of time, I recommend that you do! Chili tastes even better the next day after it has had time to sit and the ingredients have had time to mingle.

There are some who feel that chili is a 2 day process. Not because it takes that long to cook, but because chili is truly at it’s best the following day so that’s when it’s ready! Also means it makes great leftovers and low carb meal prep!

If you are looking for a simple and comforting low carb recipe that can be made in large batches ahead of time, then my low carb chili con carne is the recipe for you! 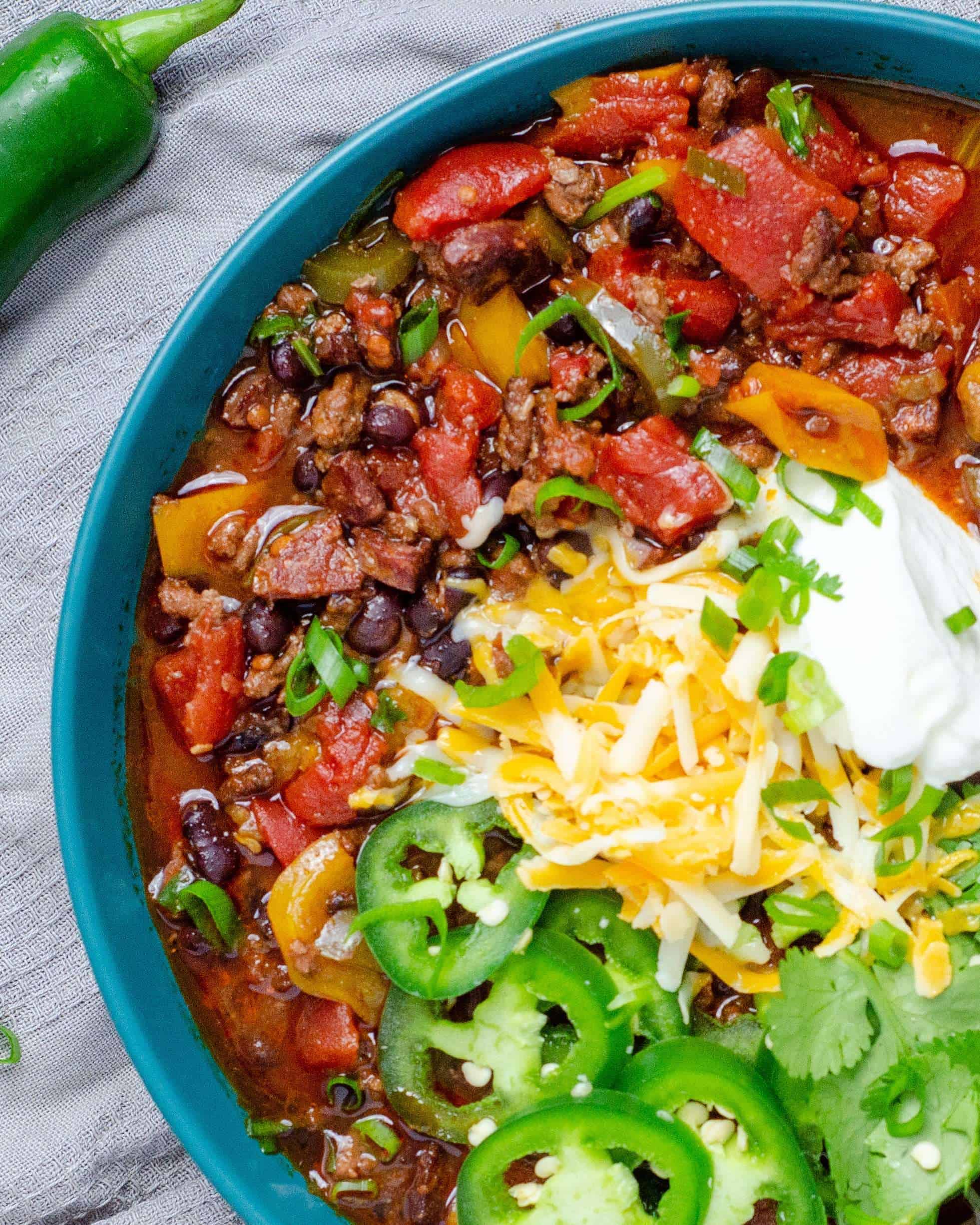 Time To Dive In!

I really hope that you enjoy this low carb chili con carne, and may it keep you warm, cozy, and satisfied on the cool days ahead.

I had a lot of fun with this low carb recipe and I hope that you do as well!

Let me know in the comments down below what you think and what modifications you made to make this low carb chili your own!

If you liked this recipe make sure you share it with others so they can enjoy it as well!

Take a second to share if you liked this recipe: 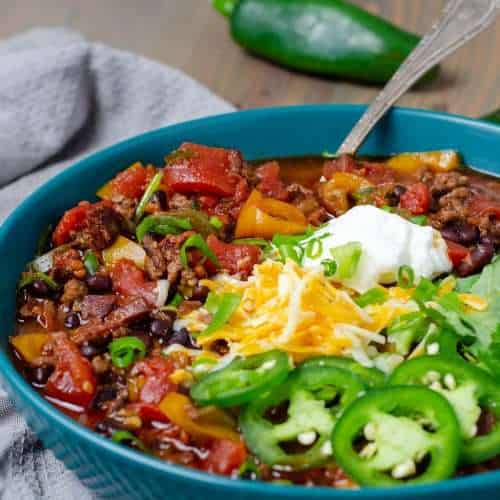 Protein Choice: And dry cured sausage or even bacon can be used instead of dry cured chorizo, Low Carb Black Beans: I usually go for black turtle beans or black soy beans depending what is available. Just look at the label and pick the lowest carb one you are comfortable with.  Something around 25g net carb per cup will work well. You can also try these 1g net carb black soy beans! You can of course omit the beans completely depending on both your chili con carne and low carb beliefs.  This 8g net carb chili is a great comfort food to cozy up to on a cool fall day! Click To Tweet

Calories: 390kcalCarbohydrates: 13.8gProtein: 27gFat: 22gSaturated Fat: 8.3gSodium: 830mgPotassium: 750mgFiber: 5.4gSugar: 5gCalcium: 115mgIron: 4.9mgSugar Alcohols: 0.3gNet Carbs: 8.1g
Did you give this a try?Mention @yummyforadam or use #yummyforadam on instagram!
Looking for a different low carb recipe?Something you don't see here or looking for a low carb version of your favourite recipe? Let me know so I can get working on it! Contact me directly or leave a comment!
Keywords: Chili, comfort food, fall recipes, ket chili, low carb
Instagram

Did you give this a try?

Tag me @yummyforadam on Instagram and use the tag #yummyforadam or comment down below. I would love to hear from you

Looking for a different recipe?

If you are looking for a recipe for something you don’t see here, or would like to see my version of a certain recipe. Please contact me and let me know so I can get working on it! 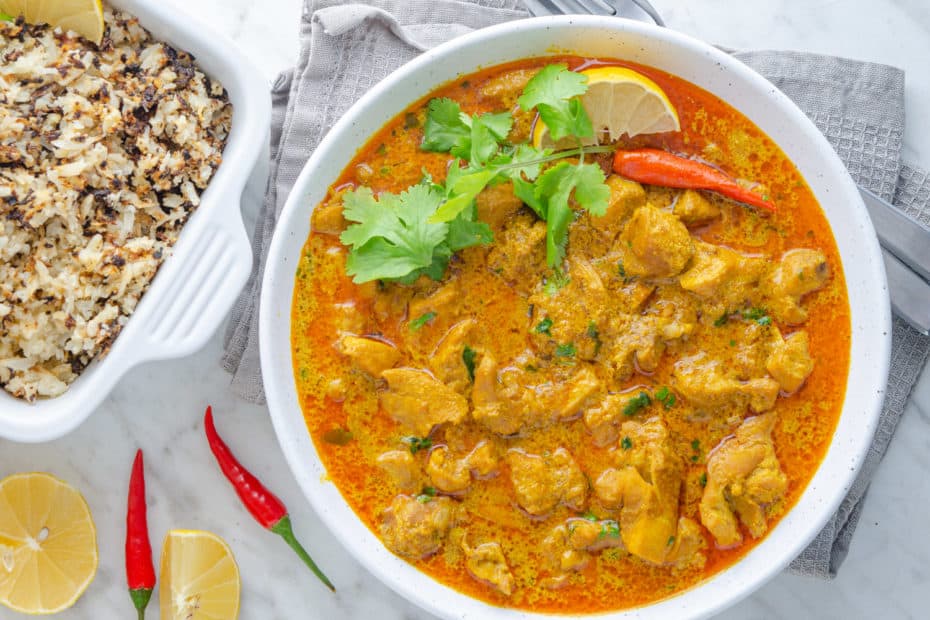 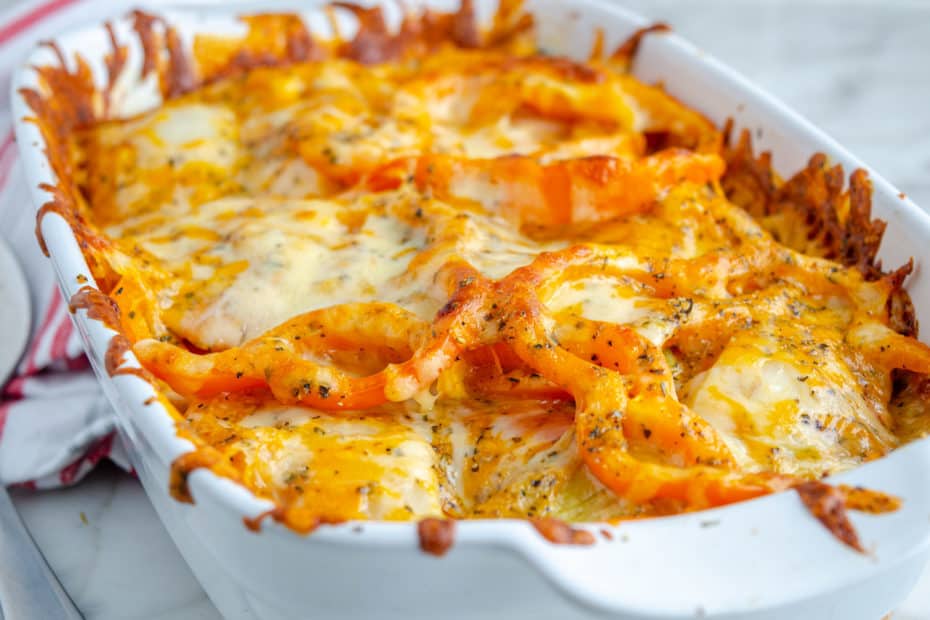 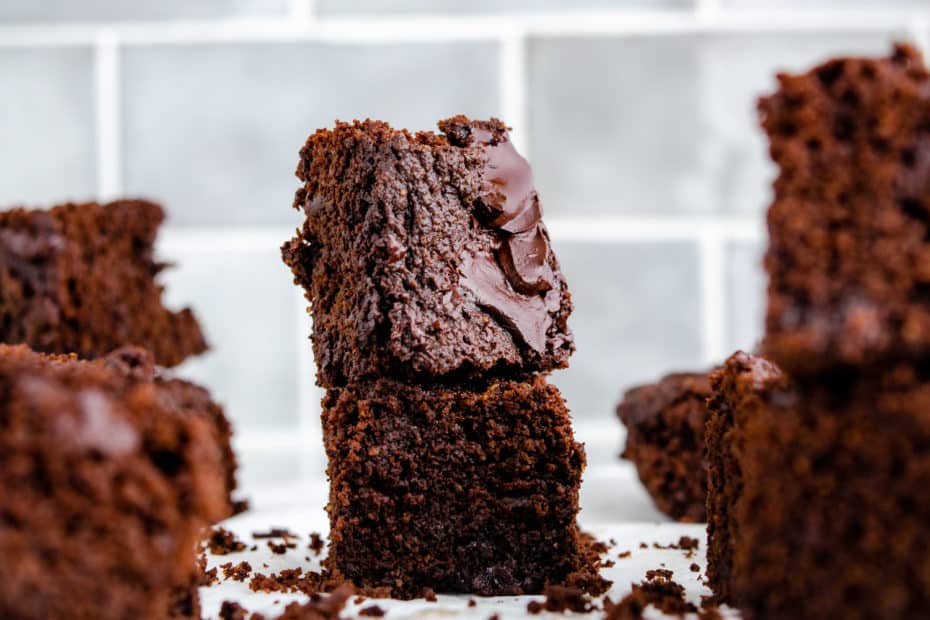 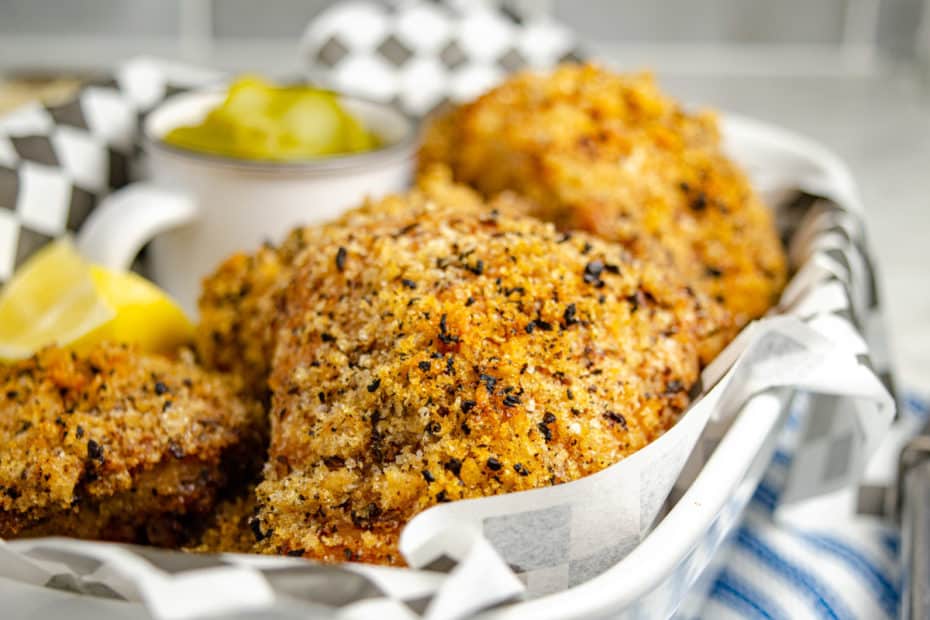 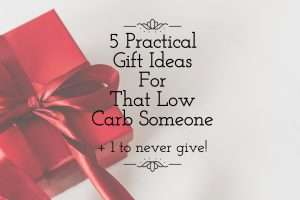